The Winter 2022 Journal is available online.

We expect the journal to ship from the printers either late this week or early next week and they should be in your mailbox shortly thereafter!

This handbook contains the 2016-2019 updates, as well as updates to the C-TCCC protocols and the most current CPGs.

The print edition is currently available in the traditional paper and waterproof/tearproof paper. 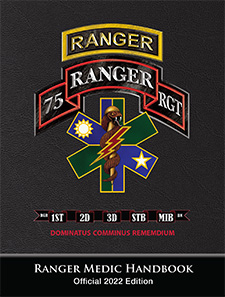 You may order your handbook from the storefront now, and digital subscriptions are also available.

This handbook is a significant update to the 7th edition.

The Advanced Ranger First Responder Handbook is now avaiable for sale through our storefront, as well as digitally on our website. Wired subscribers will have access to the flipbook version of the ARFR Handbook, and mobile users can download the PDF to their tablet device.

The Journal of Special Operations Medicine (JSOM) and the Wilderness & Environmental Medicine (WEM) journal continue a long-standing shared science program. This opportunity is made possible through a reciprocal partnership between the journals. Select past articles appearing in WEM which may be of interest to JSOM readers can be accessed at no cost. Simply click on the WMS logo below or visit https://www.wemjournal.org/content/sharedscience to access articles for free.

The OFFICIAL Journal of the Special Operations Medical Association.

An Exploratory Comparison of Water-Tamped and -Untamped Explosive Breaches: Practical Applications for the Tactical Community via a Pilot Study

Background: Tamping explosive charges used by breachers is an increasingly common technique. The ability to increase the directional effectiveness of the charge used, combined with the potential to reduce experienced overpressure on breachers, makes tamping a desirable tool not only from an efficacy standpoint for breachers but also from a safety standpoint for operational personnel. The long-term consequences of blast exposure are an open question and may be associated with temporary performance deficits and negative health symptomatology. Purpose: This work evaluates breaches of varying charge weight, material breached, and tamping device used to determine the value of tamping during various scenarios by measuring actual breaches conducted during military and law enforcement training for efficacy and blast overpressure on Operators. Methods: Three data collections across 18 charges of various construction were evaluated with blast overpressure sensors at various distances and locations where breachers would be located, to assess explosive forces on human personnel engaged in breaching activities. Results and Conclusions: Findings indicate that water tamping in general is a benefit on moderate and heavy charges but offers less benefit at a low charge with regard to mitigating blast overpressure on breachers. Reduced overpressure allows Operators to stage closer to explosives and lowers the potential for compromised reaction time. It also reduces the likelihood of negative consequences that can result from excessive overpressure exposure and allow Operators to "do more with less" in complex environments, where resource access may be limited by logistic or other limitations. However, tamping in all instances improved blast efficacy in creating successful breaches. Future studies are planned to investigate tamping mediums beyond water and environment changes, whether tamping can be used to mitigate acoustic insult, and other explosive types.

This report documents the remarkable decrease in casualties killed in action during the wars in Iraq and Afghanistan and the role of the Joint Trauma System, the CoTCCC, and the TCCC Working Group in helping to make that happen. It also outlines a clear and comprehensive vision for a National Trauma System that will enable the civilian and the military sectors to work in concert to help prevent ALL potentially preventable deaths in trauma victims.

Download a free PDF copy of the IOM Report

What Our Readers are Saying

I just finished reading the fall edition of the JSOM and I am completely blown away!!!! It is absolutely packed with exceptional and relevant information that without a doubt, will assist SOF Tactical Health Care professionals in providing relevant and evidence based patient care. Thank you for providing what I consider a "World Class Medical Journal". The journal itself and the website have become my primary resource for knowledge in tactical medicine."

"There is no peer-reviewed academic resource that equals the Journal of Special Operations Medicine for support of the medical and veterinary lead in Stabilization, Security, Transition and Reconstruction (SSTR) operations, combat and field medicine, and adaptation of Tactical Combat Casualty Care into Tactical Emergency Casualty Care for the law enforcement and emergency management community in 195 UN member countries. JSOM is a valuable resource as we continue the Millennium Medicine Project, targeting the global population that lacks access to basic surgical services and providing crisis management, security, and defense support in this demographic."

"Military units that have trained all of their members in Tactical Combat Casualty Care have documented the lowest incidence of preventable deaths among their casualties in the history of modern warfare - and JSOM is the first journal to publish every new change in TCCC."

"The past 30 years has brought an amazing professionalization of the specialty of Tactical Emergency Medical Support (TEMS). As new standards are set and the world faces increasingly complex security challenges, it is critical that the front line medical providers supporting military, intelligence, and law enforcement operations have a mechanism to expand their knowledge and share best practices. The Journal of Special Operations Medicine offers civilian readers access to the most cutting edge developments in the field including updates on Tactical Emergency Casualty Care (TECC), the National TEMS Imitative and Council (NTIC), and combat lessons learned. JSOM is the one-stop shop for best practice and future advancements in civilian TEMS. One of the unifying principles across humanitarian, expedition and disaster response medical operations is the ability to make complex decisions in uncertain environments. The Journal of Special Operations Medicine is one of the most unique platforms for experts to convey lessons learned and relevant scientific advances across specialties that historically have little interaction. Whether you work for Doctors Without Borders, a DMAT, or provide medical support for expeditions in austere environments, Journal of Special Operations Medicine is your journal."